For the copper coinage of George IV, Britannia, for some reason was turned around to face right instead of left. The sea, waves and ship also disappeared, although the trident remained. On the "First Issue" copper, farthings from 1821 to 1826, a lion is shown seated at Britannia's far side.

She is also shown wearing a corinthian helmet, which, combined with the notable absence of the olive branch of peace indicates a military aspect, bragging about Britain's naval power. The helmet was to remain as a permanent feature. The Union Flag was more accurately rendered with three crosses, previously it was only shown with two. This version of Britannia was engraved by William Wyon
These farthings were the first British coins issued bearing the words Fidei Defensor, meaning "Defender of the Faith". On the second issue copper coins, issued from 1825 onwards, a rose, shamrock and thistle are shown in the exergue, and the date was moved to the obverse, below the head.

Britannia continued to face right on coins until the standing Britannias on florins of Edward VII, and British Trade Dollars. and most subsequent issues have also shown her to be facing right. 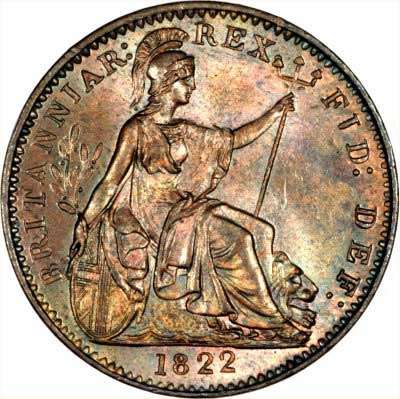 Britannia With Lion on an 1822 George IV Farthing 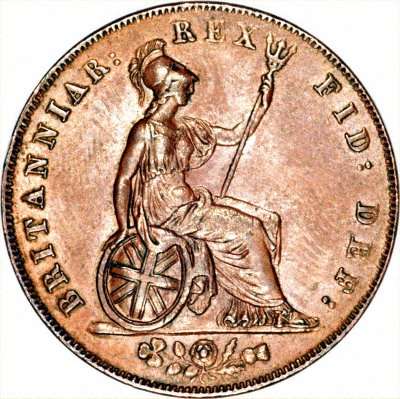 Britannia on an 1827 George IV Halfpenny