Britannia on Other Coins

Britannia spread to two new denominations under George IV, a half farthing and a third farthing, both with similar designs to the other coppers. This brought the number of denominations on which Britannia had appeared to six. Her popularity was rising. 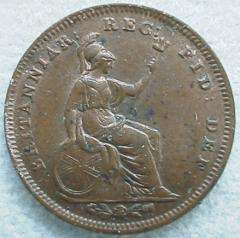 Britannia on the Reverse of a Third Farthing of 1844

British copper coins were declared the sole legal tender copper currency in Malta in November 1827 and in April of the following year all copper coins of the Order ceased to be legal tender. To this effect, a copper coin, called the British Grain (1/3 farthing), had been struck by the Royal Mint in England for exclusive use in Malta and issued for local circulation in 1827. This coin, meant to replace the so-called Malta Grain, locally known as "Habba", and which had been minted by the Order, continued to be struck until 1913. A proposed design for the Grain, sent by the local Government to the Secretary of State in 1825 which depicted the value "1G" within a circle surmounted by the name 'MELITA' on the reverse, was not adopted by the Royal Mint who instead preferred the seated figure of Britannia.

There were no changes to the Britannia designs during the reign of William IV, except that another new denomination was added to Britannia's domain, a groat or fourpence. Unlike the copper coins, this had the date on the reverse under Britannia. 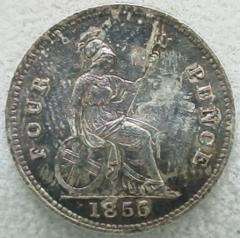 We want to buy any Britannia third farthings and groats, particularly in better grades, so that we can display better photographs on this page.