Britannia continues to appear on coinage throughout Queen Victoria's reign on copper and bronze coinage...

With Victoria's accession, there were no immediate changes to the copper pennies, halfpences, or farthings. These continued with similar designs to these used for William IV, as did the silver groat, which continued to be issued until 1888. The half and third farthing designs were changed to an inscription of their value, so Britannia was dropped from these, but a quarter farthing was introduced in 1839, and Britannia was used as its reverse design, bringing her to a total of eight denominations which she had graced. 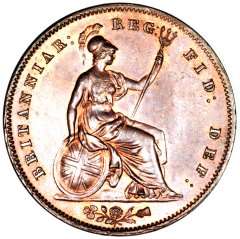 Britannia on the Reverse of a Victoria Copper Penny of 1848

The copper coins gave way in 1860 to a more modern issue of bronze coins. Farthings, halfpennies and pennies continued to feature Britannia.

Many "bun" pennies, Victoria's young head designs showed her hair in a bun, were still in circulation during the 1960's, so the writer, despite being only 29, can remember seeing many in change.

The sea and a ship made their re-appearance, and a lighthouse was added. From 1881, heraldic colouring was added to the shield.

These young head bronze coins, still referred to as "coppers" were issued until 1894, and 1895 in the case of the farthing. 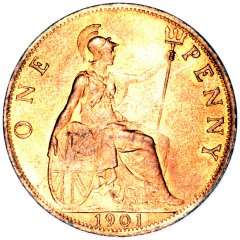 Britannia on an Old Head Bronze Penny of Victoria 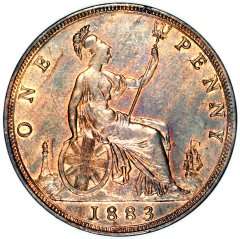 Britannia on a Young Head Bronze Penny of Victoria 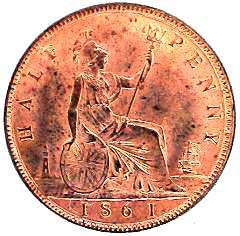 Britannia on the Reverse of a Victoria Bronze Halfpenny of 1861

The jubilee head was never used on the bronze coins, so the obverse designs passed directly from the young head to the old head in 1895 until the end of Victoria's reign in 1901. The lighthouse and ship both disappeared, but the sea remained, at two different levels in 1897.