We have already seen that Britannia, in the guise of a third farthing, took a holiday in Malta. She also surfaced in the Island of Ionia, near the birthplace of coins, in the form of a Lepton, another small bronze coin. 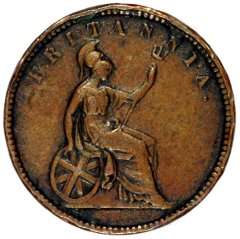 Britannia on an Ionian Islands One Lepton of 1857 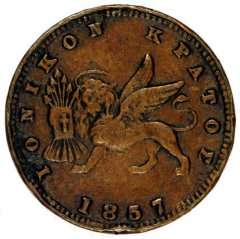 During the late eighteenth and early nineteenth century, at the height of the British Empire, she paid visits to many foreign lands, sometimes in the form of tokens.

An Australian penny token dated 1848, using the obverse of a Soho Mint penny of 1806?

We want to buy any world coins featuring Britannia, particularly in better grades, so that we can display better photographs on this page.