Anne was the younger daughter of James (James II) Duke of York via his first marriage. As the second daughter of Charles II's younger brother, her acsension seemed unlikely at the time of her birth, however, events would later see her reign as the first sole Queen Regnant since Elizabeth I a century earlier. 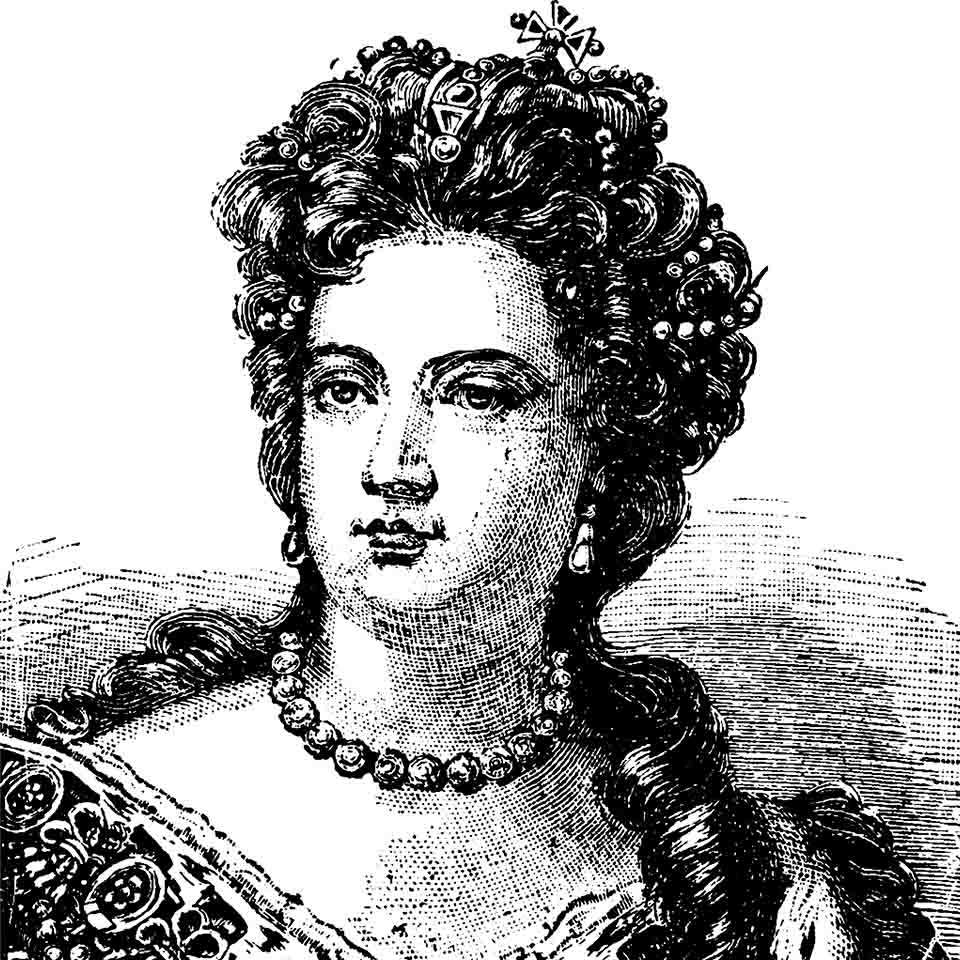 Anne spent some of her early life in France, where the French climate was thought to be more amenable to the young princess' health. Three years after returning to England, Anne met Lady Sarah Jennings (later Lady Sarach Churchill, Duchess of Malborough). When Anne later became Queen, Sarah would become one of her most influential favourites. Once her father's conversion to catholicism became known, Charles II insisted that both she and her sister Mary should be raised protestants (presumably for political reasons, as Charles II was himself a crypto-catholic).

In 1683, Anne married Prince George of Denmark, who despite his reputation for being a dull and uninspiring person, was nevertheless well respected and loved by the future Queen and during her reign would come to be well respected for his administrative abilities as Lord High Admiral.

In 1688, the unpopularity of her father's reign came to a head, and Anne's sister and brother in law, Mary and William, landed with an invasion force at the invitation of England's leading nobles to depose him. After a series of high profile defections (including that of John Churchill, husband of her closes friend Lady Sarah) Prince George and Anne decided to defect to William and Mary, contributing greatly to her father's decision to flee to France instead of making a stand. However, in spite of Anne's support for William and Mary, she was alienated from the Royal Court due to their hostility towards the Churchills, whom William and Mary suspected of being jacobite sympathisers, in spite of their own crucial defection to them in 1688. Anne particularly detested her brother in law, and the feeling was mutual. In spite of this however, William made overtures to restore Anne and George's royal honours in return for their public support, which William needed due to his own unpopularity with the British public following his wife's death in 1694. As William and Mary had no children, Anne remained as heir apparent. Two years before the commencement of her own reign, Anne's last surviving child, William, Duke of Gloucester died. It now became likely that Anne would not produce any more heirs to continue the protestant Stuart line, and as a result, the 1701 Act of Settlement was introduced, stipulating that the closest protestant relatives of Anne (Sophia, Electress of Hanover and her descendents) should succeed the throne in the highly likely event of Anne or William III failing to produce any more children).

In 1702, William III died as the result of a riding accident. During her coronation, Anne made a point of distancing herself from her unpopular brother in law, and emphasised her English credentials in contrast to William's foreign Dutch origin when she said 'I know my heart to be entirely English'. However, in spite of her antipathy towards her predecessor, she continued his policies at home and abroad, and declared war on France in 1702 over the issue of the Spanish succession, as William III himself had been planning to do at the time of his death. This war proved to be a turning point in British history. Fears had been raised that Scotland might choose a different king, possibly even the exiled 'James III' and ally with France, to prevent this from happening, England offered a deeply indebted Scotland union in return for access to England's colonial markets and payment of her debts, a proposal which the Scotland Parliament accepted in 1707. The Scottish Parliament abolished itself and Scottish MPs were to be sent to Westminster instead. Thus the United Kingdom of Great Britain was formed. The war itself, in which Britain remained as a combatent until 1713, cemented Britan's world power status in the years to come, thanks to victories achieved by John Churchill, Lady Sarah's husband. However, in spite of this, Anne had come to tire of her childhood friend's domineering personality and disrespectful attitude towards her as Queen, and towards the end of her reign, they found themselves out in the cold, with Lady Sarah expelled from court and John Churchill dismissed from his position as Captain-General of the British Army, in spite of his unparalleled success against the Armies of France.

Anne had spent most of her reign in poor health, and her last surviving child had already died by the time she came to the throne at the age of 37. Anne blamed her poor health and the loss of her children on God's anger with her for betraying her father, and towards the end of her reign, she let it be known that she desired that her younger half-brother James, the 'Old Pretender' should succeed her. However, James' refusal to convert to protestantism and the 1701 Act of Settlement had made this succession illegal. When Anne died in 1714, she was succeeded by George, Elector of Hanover. 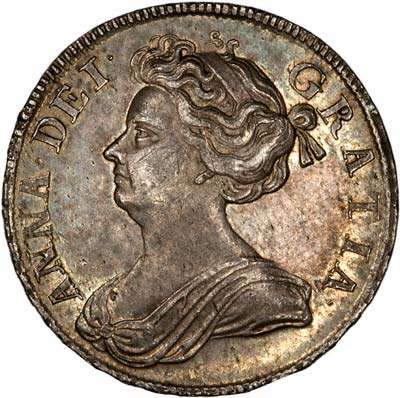 Under Queen Anne, Britain was formed as a single nation and thanks to the victories gained during the War of the Spanish Succession, became one of Europe's leading powers. Her failure to produce surviving heirs led to the end of the Stuart Dynasty in Britain, and a renewed upsurge of Jacobist activity in Britain for the next few decades.

Numismatically, England's coinage merged with that of Scotland based on the English standard, with one English Penny equivilent to one Scottish Shilling. The Scottish Mint in Edinburgh remained open until 1710, producing British coins for the newly United Kingdom, with an 'E' mintmark. The 'VIGO' issues of 1703 are particularly interesting, as they were made from bullion captured from the Spanish at the Battle of Vigo Bay in 1702.

Unusually, no copper was struck for circulation during Anne's reign, although pattern farthings were issued in 1714, which became the basis of the 'dump' farthings of George I in the years to come.