2018 British Lunar Year of the Dog

You have reached our blog, if you would like to buy the 2018 British Year of the Dog Lunar Coins click this link.

Introducing the 2018 Year of the Dog coin from the Royal Mint. This is the fifth coin in The Royal Mint's Shēngxiào Collection which was launched in 2014. The British lunar series has been well received by both coin collectors and investors.

Year of the Dog Design

The reverse of the 2018 British lunar Year of the Dog coin features an engraving of a terrier, running with its ears back and its mouth open – we would have loved to see a lolling tongue! The background has a slightly speckled texture which rather makes it look as though the dog is running through some mud. The British lunar collection, designed by Wuon-Gean Ho, displays a fusion of Chinese culture with British tradition. The obverse features a new guilloche background design which helps to prevent the small hairline scratches that were an issue with the first lunar coins from the Royal Mint. Containing one troy ounce of either gold or silver, the gold coin is minted in 999.9 fineness and the silver coin is minted in 99.9 fineness. The coins are struck to an uncirculated finish and are sold at a low premium above the spot price for investment. This year the one ounce coins will be supplied in capsules which will protect your bullion from scratches or scuff marks. The gold coin is VAT free and both the silver and the gold coins are exempt from Capital Gains Tax.  This makes them particularly attractive for residents in the United Kingdom who are looking to invest in gold or silver bullion.

We sell British lunar coins individually and with great value quantity discounts when you purchase the coins in bundles, tubes of 10 or in monster boxes. 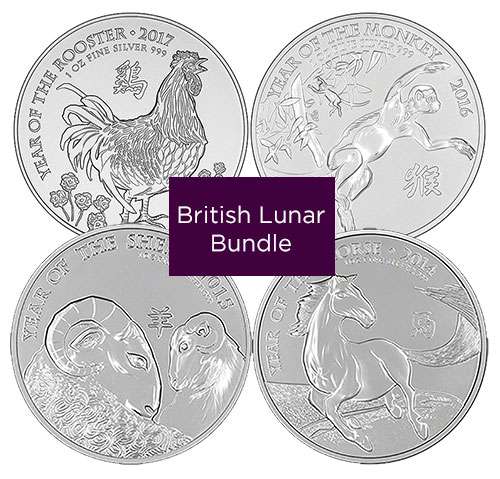 Take advantage of the oppawtunity to purchase back dated lunar coins, visit our website for availability of the 2014 Horse, 2015 Sheep, 2016 Monkey and more recently, the 2017 Rooster. They won't be around furever.